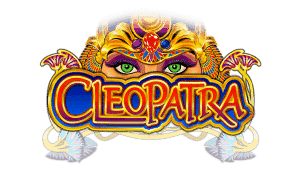 Game description: Cleopatra is one of the most popular slots machines ever made and despite it's age, people all over the world are still in love with the game.

The Cleopatra slot is a game designed and created by big gaming developers  International Gaming Technology (IGT). The company is known for building and distributing software for both offline and online casinos across the globe. It’s also one of the leading companies in the manufacturing and design of gaming systems as well as casino games. The Cleopatra casino game has become one of their most popular games, which lead to the creation of a sequel known as the Cleopatra II slot machine.

The Cleopatra game is based on the enchanting Cleopatra, the Egyptian Queen. It ideally incorporates a lot of the Egyptian culture into the gameplay. If you’re willing to have your hand at the slots, you will definitely want to try out this fascinating and exciting slots game.

Cleopatra is essentially the classic Cleopatra slot machine offered as a free version. It’s among the most popular slot machine games ever developed, and regardless of its age, the game is still loved by people from all over the world. You can play the free Cleopatra game here with no need to register or download it just click and start playing.

The Cleopatra slots game is based on the traditional slots machines found in almost all casinos. The main difference between this game and the regular ones in casinos is that instead of having three reels, the game has five. Moreover, the game is created in such a way that the company has enabled a touch feature that adds on to the interactivity of the players within the game. There are also 20 pay lines available for the players to bet, and every coin dropped into the slots activates a specific pay line.
The minimum amount that a player can wager is one penny, and the maximum bet goes up to $10 per pay line. The normal range of betting is between $0.10 and $5. There’s a chance that a player can win up to 10,000 credits, since this is the maximum payout for each activated pay line.

The gameplay is quite unique in that it uses lots of elements from the Egyptian culture like the language and music symbols. Adding on to this, a seductive voice that’s interpreted as the voice of the most beautiful queen of Egypt will definitely keep the player fixated on the hours on the game for hours at a time. The popularity of Cleopatra among the public combined with the intense video graphics as well as IGT’s animation has made this game one that will never lose its charm for a long time.

One of the things that the game does best is taking a lot of imagery from the Egyptian culture and incorporating it into the regular gameplay. The symbols on the different reels are all borrowed from the culture, such as the Sphinx, the beetle, and various hieroglyphics that can be associated with Egypt. However, the face cards on the reels are actually represented by the same lettering, which is not a benefit or drawback to the game. Nonetheless, it adds to the authenticity of the game by integrating the various elements of regular slots.

As mentioned earlier, the Cleopatra game is based on regular slots, which are generally found in many online and offline casinos. The player has to insert a coin into the game in order to activate the pay line. They then have to place a bet on each pay line for a certain amount, and the payout will be based on the matched combinations.

There are many other features that help to increase the chances of winning, such as the scatter and the wild symbol. The scatter symbol is represented by the Sphinx, the famous Egyptian landmark, and if this symbol appears three or more times on the reels, it activates the bonus free spinning round, which includes 15 free spins.

The player also has the opportunity to get up to a maximum of 180 free spins during the bonus round. A winning combination on the free spin bonus actually gives the player a chance to triple the winnings. The scatter symbols in normal gameplay, will help to double up the bet waged if there are two or more symbols that are shown on the reels.

The wild symbol in the game is embodied by Cleopatra herself, and it substitutes itself for another symbol apart from the scatter symbol, which allows the player to make a winning combination. The symbol also gives you double the payment amount in case you make a winning combination. Whenever there’s a mishmash of 5 wild symbols while playing, the player is given 10,000 credits, and offered an chance to win 100 times of the amount wagered.

All you have to do is click on the “play” button to start enjoying a real Las Vegas version of the classic game. The Cleopatra slots is immensely popular and we hope that you will enjoy playing our free version.

As one of the most popular games in Vegas casinos, you can play the Cleopatra for real money. It’s quite popular in the high limit slot rooms and can be played in casinos such as the MGM Grand, Bellagio, Caesars Palace, The Venetian, and dozens of others. The high limit game is generally available for about $1 per pay line, but you can pay 5 credits per line, meaning that you can play for $100 per spin if you want to.

Caesars Palace is arguably the best casino for high limit play with its two high-limit rooms. You can also play the Cleopatra Slots game online for actual cash at our recommended online casinos. Keep in mind that the game is only available to play for real money in a number of countries, and if yours is on the “unavailable countries” list, the casino shown will offer a similar game. For instance, you may be offered Cleopatra’s Gold or Cleopatra’s Coins.

Texas Tea and Buffalo slot machine are the other highly prevalent high limit slots in Las Vegas. When it comes to the real games, Triple Diamond and Double Diamond are quite popular due to their high stakes, both of which are easy to find in most high-roller rooms of casinos in all over the US.

Of course, there are lots of other unique online video slots on unusual topics, but there are several popular slot themes repeated from one provider of casino software to another. Cleopatra, and other ancient Egypt are some of the most popular. In fact, there’s hardly a single casino developer who doesn’t have a few Cleopatra slots in their games list.

This is perhaps because legend has it that Cleopatra was one beautiful Egyptian queen who was blessed with untold wealth. This has given modern gamblers a chance to touch the legend and win a part of the queen’s fortune with the Cleopatra themed games.

Although there are some classic simple slot games devoted to Cleopatra’s theme, it doesn’t mean that these ancient-themed slot games will look and work like they were invented centuries ago. If you’re one of those people who play casino games often, you probably know that much of the advanced features in modern games are included. In some of the most popular games, you’ll find free spin modes, bonus rounds, scatter and wild symbols, different betting options and multipliers. All these allow you to start from the minimum bet as a newbie and progress to placing large bets as you get more experienced.

Regardless of which Cleopatra slot machine game you’re playing, it’s easy to catch the game’s theme at first glance. The first thing that catches the player’s eye is the graphics. Much of the Cleopatra game slots starting from the simple 2D games up to the high-end 3D graphics are developed in the ancient Egypt golden style full of wealth and nobility. The symbols are the queen herself, her jewels, snakes, and other Egypt-like things such as the greenish scarabs and the Sphinx. Of course, the animation and the music should render the antique atmosphere of riches and legends perfectly.

The Cleopatra theme is used by both small and large casino games developers. For example, you can find both the Cleopatra I and Cleopatra II games in IGT collection, the Cleopatra Coins made by Rival, Secrets of Cleopatra developed by SkillOnNet, the Grace of Cleopatra by EGT, and many more. All of these and other similarly themed games can be found in the list below.

All of the games on the website imhighroller.com are free and can be played online without having to download. You can actually play them free of charge right here without having to register or download anything. But to make the most out of the various Cleopatra treasures, it’s recommended that you try playing with real money in one of the casinos from the imhighroller.com list. It’s safe, easy, and can get quite lucrative if you know how to play and get a bit of luck. Don’t be afraid of taking the adventure to the Nile. Who knows, you can even be one of the friends who discovers the secret Cleopatra treasures in the game.

This is still a major hit across the world. While some of the older Cleopatra Slots machines might be a bit faded today, they are still fun to play. Nonetheless, the new ones being released are amazing bright and vibrant.

The two Sphinx symbols give out an instant scatter reward, but if you get three, fifteen free spins and big money jackpots can be won. The game also has some interesting voice overs while you play, a woman’s voice encouraging the player, wishing them luck along the way. When you get 3 sphinx symbols up on the screen The scatter pay bonus will trigger automatically while the slots bonus is set off when there three symbols in a row.

In the second version of Cleopatra slots, IGT have managed to improve on the original version and produce something that is both beautifully made and with new features that make it more exciting to play.

One of the fan favorite features is the free spin bonus, which lets you win up to 50 free spins. With each of the spins, the multiplier will go up by one. When you hit 50 free spins, the final spin will pay 50 times, meaning that you could win a massive amount.

Along with the second version of Cleopatra slots, IGT have recently introduced new versions of the original. The key difference with the newer games is that the screens, the speakers, and the graphics have all been updated, which is quite amazing to hear. The little difference that these small changes make add on to how great the game is to play the whole experience has actually been updated.

Cleopatra slots is also available to play for real money in Canada. Check out our list of Canadian online casinos to see the best casino to play.

The game is also hugely prominent in casinos all over New Zealand and Australia. However, these kinds of games tend to be referred to as pokies other than slots, though they are one and the same thing. Out of all the pokies that are available in Australia, Cleopatra is one of the most searched-for and played. If you’d like to play pokies online, be sure to check out our Pokies page.

If you’d like to play on a mobile device like an Android device, iPhone, or an iPad, we have a free Cleopatra slots game available to play on all mobile devices and tablets. You can also play the game on both desktop computers and laptops.